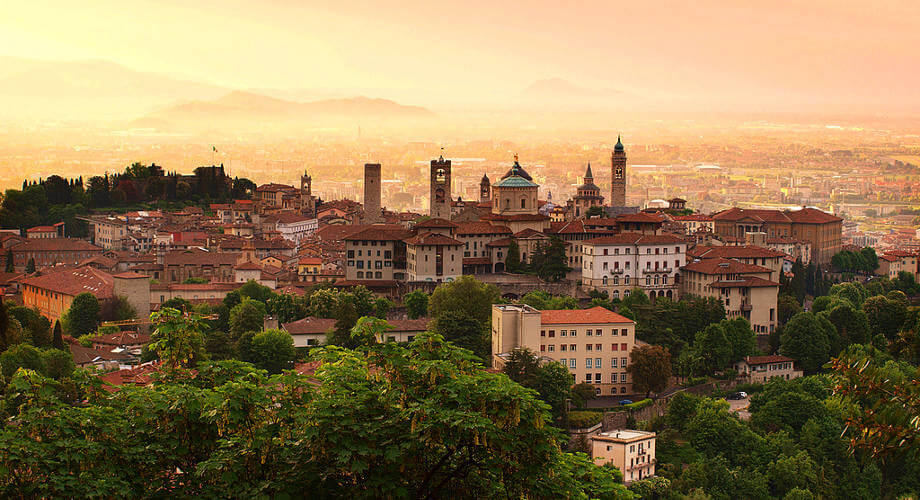 Bergamo is both a province and a city, and can be found in the Lombardy region. Popular for its laidback atmosphere, picturesque streets, excellent range of dining options and wonderful views, this a great Lombardy regional alternative to a Milan city break.

The city is essentially split in two: Citta Bassa is the busier lower section of the city with a more modern feel, while Citta Alta is the upper city, which is where you will find the majority of the historical and cultural attractions. Getting from Bassa to Alta is quite hard work on foot as there are steep, winding streets. However, there is a cable car that is an appealing alternative to public transport.

Rich in Culture and History

Sitting at the foot of the Alps, Bergamo is an exceptionally beautiful setting. Not only can you enjoy the pleasant hilly backdrop but there is also an excellent concentration of charming mediaeval and Renaissance architecture on display, most notably in Piazza Vecchia, a handsome town square. In addition, there are splendid examples of churches and chapels including the Santa Maria Maggiore, which was built from the 12th to the 14th centuries and features a stunning baroque interior.

The city is also home to several amazing museums that are well worth taking the time to explore. The Science Museum and Archaeology Museum offer a broad insight into their respective subject matters whereas, if you are looking for a more Bergamo-centric experience, the Donizetti Museum looks at the life of composer and 19th century Bergamo resident Gaetano Donizetti. The Historical Museum of Bergamo is another great choice – housed in the Rocca, a stronghold built in the 14th century.

If you are arriving at Malpensa Airport, Bergamo is an easy drive. The airport is situated to the west of Milan, while Bergamo can be found to the north-east of the city. If you hire a car and drive, the journey should take you no more than one hour 15 minutes, but this can be quite dependent on traffic. The journey is relatively simple: follow the E62 towards Milan before heading onto the E64, which will take you all the way to Bergamo.

If you don’t plan to drive during your holiday it is possible to get a taxi, bus or train from Malpensa Airport, and you can travel into Milan and then onwards to Bergamo.