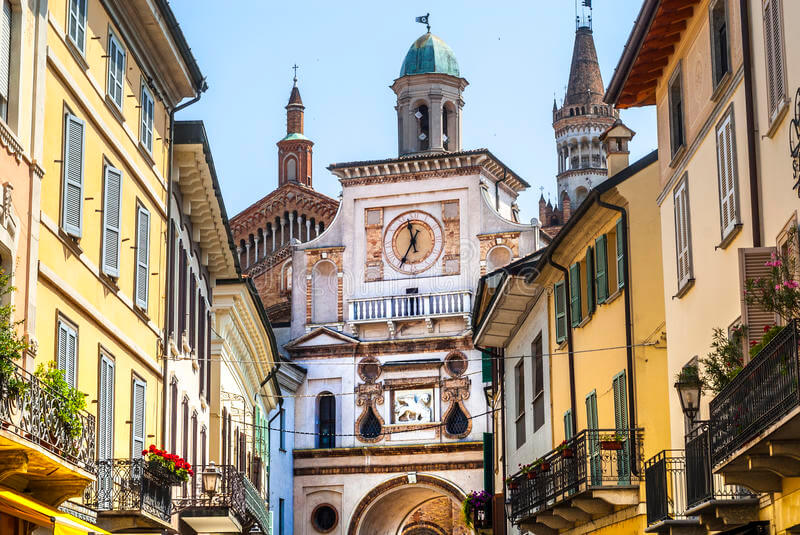 Chosen as the primary location for 2017’s celebrated romantic drama Call Me By Your Name, Crema has been enjoying a much-deserved boost in tourism ever since. Its charming piazzas and beautiful duomos are interspersed with timeless, postcard-perfect streets – a truly idyllic setting for simply enjoying a coffee and soaking up the sunshine.

What happens in Crema?

If you fell in love with Crema thanks to the film, you will be pleased to know that many of the locations are actually nearby (Hollywood being renowned for making two very distant settings seem tantalisingly close).

The scene with the archaeological dig was filmed at the stunning Lake Garda, which is around an hour and forty-five minutes’ drive away, while Bergamo (where the two main characters travel to enjoy their last few days together) is about an hour north.

Even if you haven’t watched the film, you won’t feel left out. Your first stop should be the Piazza del Duomo, which somehow encapsulates everything that is classic Italy in an understated, enchanting manner. In its centre stands the impressive Crema Cathedral (Duomo di Crema), built in the Lombard-Gothic style. Once you’ve looked inside, grab a gelato from one of the nearby cafés and stop to appreciate the impressive façade of the town hall clock tower before wandering through the pretty arcades.

Another building that you absolutely must view is the Santa Maria della Croce, a Roman Catholic sanctuary and minor basilica, on Via Donato Bramante. As if the circular shape and intricate Venetian gothic arches on the exterior weren’t beautiful enough, inside is a breathtaking masterpiece of colour and light.

Finally, make sure to grab a dish of Crema’s traditional stuffed pasta, tortelli cremaschi. Unlike any other Italian tortelli, it is made with a sweet filling of amaretti biscuits, spices, candied fruits and raisins.

The months from June to September are generally accepted as having the best weather to enjoy Crema. Spring and autumn tend to be rainy, so sun-seekers should avoid March to May or October to November if they want to make the most out of their trip. Winter is usually cool, with temperatures in December and January dropping to just below zero.

The Crema train station is situated in the north-east part of the town and operates on the Treviglio-Cremona line. Regional trains are a relaxing way to travel through Lombardy from Crema, with notable stops including Caravaggio, Castellone and Olmeneta, as well as the terminal destinations.

Crema is bordered by the SP415 and the SP591, making it easy to hop in the hire car and head to Milan, Bergamo, Cremona or Lodi. There is also a charming route that heads south, taking you to Piacenza in around 45 minutes.