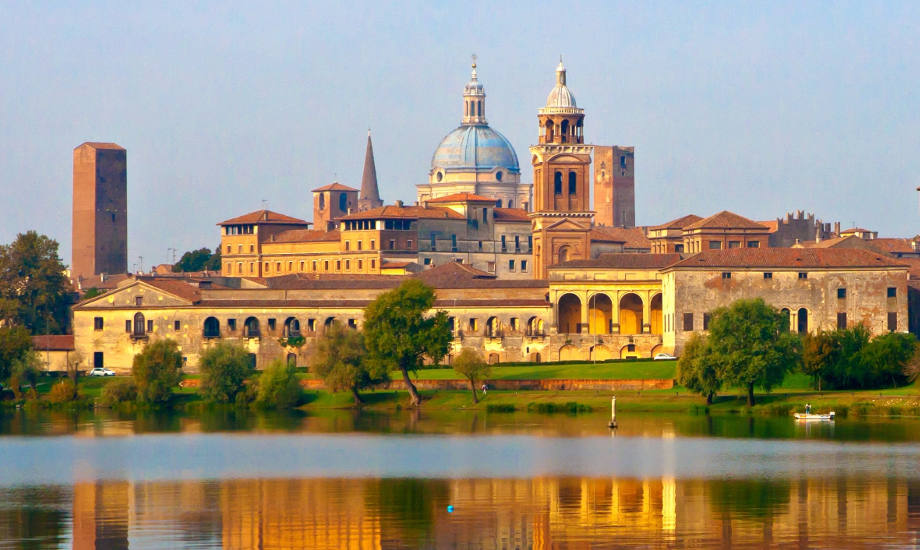 Mantua (or Mantova as it is often referred to) is a pleasant city in the Lombardy region, found a little way to the east of Milan. It straddles three large lakes and retains a relaxed and peaceful atmosphere all year round. Home to a plethora of museums and galleries, the city has a decidedly cultured feel.

History and literature buffs will enjoy the connection to great titles and events: in William Shakespeare’s Romeo and Juliet, Mantua is the city where Romeo is exiled to; while legendary Italian composer Claudio Monteverdi worked here for much of his life.

Things to do in Mantua

The heart of the city is centred around Palazzo Ducale, a palace with wonderful mediaeval and Renaissance architecture. You can find many of the city’s finest restaurants in the area. Follow the cobblestoned streets and you won’t take long to come across an impressive sight such as the Mantua Cathedral, which brings together a fusion of multiple architectural styles. At the southern end of town is Palazzo del Te, a masterpiece of the architect Giulio Romano.

It should also be noted that, as a part of the Eastern Lombardy District, Mantua was recognised as the European Capital of Gastronomy in 2017. Unsurprisingly, then, it is home to some exquisite culinary treats, with superb restaurants catering to just about every budget and taste.

Additionally, the city was awarded the title of Italian Capital of Culture in 2016, and you can still take in the city’s key artistic and cultural characteristics.

There are airports closer to Mantua, but Malpensa Airport is often used as a hub for visitors to the city, especially if they are taking a trip around different parts of the Lombardy region. Thankfully, Mantua is well-connected to both the airport and nearby Milan, so it is convenient to get to if you are flying in.

Hiring a car is popular. The drive to the city from Malpensa Airport will take around two and half hours, although some prefer to stop off in Milan rather than drive directly to Mantua. For those who would prefer not to drive, there are many public transport options including catching a train or bus from the airport to Milan and then continuing your journey on to Mantua.