Pavia is a mid-sized town of around 70,000 inhabitants in south-west Lombardy, about 35 kilometres south of Milan and within easy access for a day trip. Situated on the banks of the Ticino River, it is an attractive and prestigious university town, with alumni including explorer Christopher Columbus and Alessandro Volta, inventor of the electrical battery.

Founded by the Romans as a military garrison, the city was the capital of the Lombard Kingdom between 568 and 774. Pavia has retained a wealth of monuments from its glorious mediaeval past when it was considered to be the most important town in northern Italy.

What to see and do in Pavia

It is known as the city of 100 towers, but only a few of Pavia’s mediaeval towers have survived to the present day. Visit Piazza di Leonardo da Vinci near the university to view a good cluster of some that are still standing. Other must-see visitor attractions include Pavia’s splendid churches, in particular the Duomo (cathedral), which has the third largest dome in Italy; and the Basilica di San Michele, a masterpiece of the Romanesque style where Charlemagne, Barbarossa and other northern Italian monarchs were crowned.

Built in 1360, the Castello Visconti was used as a private residence. Nowadays, it houses the Civic Museum, the Museo del Risorgimento and an art gallery, with a castle park that once extended all the way to the Certosa di Pavia, a monastery with buildings dating to the Italian Renaissance, eight kilometres north of the town. Here, precious artworks grace the grand interior, a veritable oasis of calm and harmony. 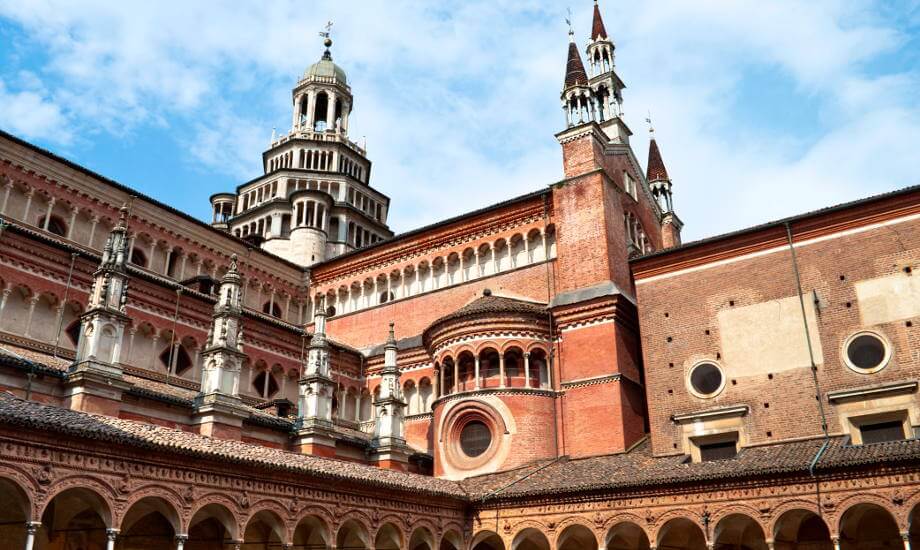 Every year, September is an important festival date in Pavia. At the beginning of the month, the Festa del Ticino includes performances, food and late shopping. Then the Settembre Pavese Festival is packed with folklore, concerts and entertainment.

Transport in and around Pavia

Pavia is served by both Milan airports, Linate and Malpensa. From Malpensa Airport, take the Malpensa Shuttle bus or Malpensa Express train to Milan’s main railway station, Milano Stazione Centrale. From there, it is a mere 30-minute train journey to Pavia along the main line from Milan to Genoa, which has frequent rail services.

If you prefer driving, car rental services are available at Malpensa Airport. Pavia can be found on the A7 autostrada, approximately 30 kilometres south of the Milano ring road, following the exit for Bereguardo/Pavia Nord.

There are several options for moving around the town of Pavia. The old town and alleys between the Ponte Coperto and Visconti Castle are best explored on foot, to allow for a slow and deliberate discovery of Pavia’s heritage and idiosyncrasies, ancient monuments and beautiful buildings.

Pavia also operates a bike sharing service (Pavia in Bici) from central points including the railway station, the Piazza della Vittoria and the San Matteo Polyclinic. In addition, there is a reliable taxi service as well as a citywide bus network, with tickets (including a 24-hour tourist bus pass) obtainable from newsagents and tobacconists.