Asti is the capital of the province of the same name in the heart of Piedmont, bordering Liguria in the south. Situated around the Tanaro River valley, it is a mostly hilly area with a stunning landscape and beautiful vineyards stretching as far as the eye can see. As one of Italy’s most important wine-producing areas, Asti is the home of Asti Spumante DOCG, Italy’s famous sparkling wine made from white muscat grapes. Despite being a major commercial centre for the wines of Piedmont, the mid-sized town of around 76,000 inhabitants still retains a friendly feel and is an excellent base for touring the region.

Asti’s historical routes date to pre-Roman times and there are still a few ruins to be seen. Between the 10th and 13th century, Asti became an important city in the west of Italy, both economically and politically, with extensive trading rights under the Holy Roman Empire. Known as the “city of 100 towers”, of which 15 have survived to this day, the old mediaeval town still contains many of the historic buildings and palaces built long ago by affluent and influential local families.

Today, when you visit Asti, there are two distinct parts: the “old” mediaeval town centred around the Piazza San Secondo with its Romanesque San Secondo Church and Crypt; and the “new” baroque town built in the 1700s around the Piazza Alfieri, named after one of Italy’s most famous poets.

Things to do in Asti 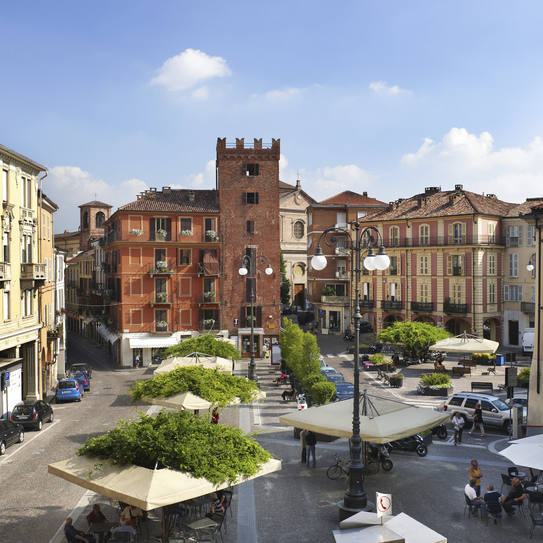 Asti’s historical roots make it an intriguing place to visit. Make sure you view some of the remaining mediaeval towers, in particularly Torre Troyana, a 49-metre high clock tower, and Torre Rosso, the town’s oldest surviving tower, dating to the first century.

Other must-sees include the narrow paved streets of the old mediaeval town, with ancient buildings, churches and palaces that are a delight to explore; the Collegiata di San Secondo, located in the Piazza San Secondo old market, and the Cathedrale di Santa Maria Assunta, one of Piedmont’s most important Gothic churches.

Once you have had your fill of historical sightseeing, it’s time to explore the local markets. There are twice-weekly general markets at Piazza Alfieri and Campo del Palio, and a daily farmer’s market at Piazza Catena, plus a monthly antique market.

While visiting Asti, it is worth considering the smaller town of Alba, 30 kilometres away, one of Asti’s fierce rivals in mediaeval times when the two towns were ruled over by feuding royal families. These days, the rivalry is much more friendly, and many Italian tours offer combined trips to Asti and Alba.

Asti is situated approximately 50 kilometres south-east of Turin. Coming from Milan, expect the drive to take around one hour, and about 1.5 hours from Malpensa Airport. You will find Asti easily accessible via the A21 Torino-Piacenza autostrada. More scenic road access includes the SS231 from Ventimiglia, the SS457 from Casale Monteferrato, and the SS458 from Ivrea and Chivasso. If you are flying into Malpensa, car hire at the airport is conveniently available.

By train, Asti is a mainline station on the Turin to Rome line, offering a frequent service. Change at Alessandria or Voghera if coming from Milan. Arriving in Asti, you will find the train station close to the town centre.

Asti itself is quite a compact town, with a large historical centre that is best explored on foot. If you are visiting by car, there is plenty of parking available at Piazza Alfieri and Campo di Palio, as well as in the old town at Piazza Romana and Piazza Catena.